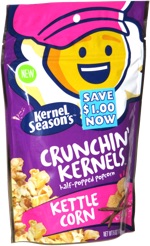 Taste test: This version of Kernel Season's half-popped popcorn stood apart from the various similar products by offering the sweet-and-salty experience of kettle corn, a sugary first for this category. We opened the bag to find that the contents looked different from expected: there were some intact half-popped kernels — though many of them looked more slightly-puffed-up than half-popped — but there were also lots of smaller bits and crumbs, sort of resembling smashed-up pretzel bits.

The many tiny pieces made it tough to eat with the hands, so I used a spoon to grab some and ate them off of that. Textures varied, a some was easily bitten into, while some was quite hard and crunchy. The sweetness definitely had it tasting much different from ordinary popcorn, but it didn't much remind me of actual kettle corn either. Decent.

Smell test: Mild, not much.

From the package: “half-popped popcorn” ... “A little sweet. A little salty. A lot crunchy. Crunchin' Kernels are partially popped, kettle cooked kernels. They are crunchier on the outside than regular popcorn, but still tender inside. Tossed in Kernel Season's Kettle Corn Popcorn Seasoning, they're a satisfying snack that's great anytime.”