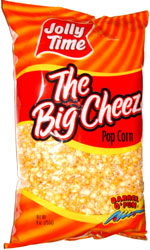 Taste test: This popcorn had a light coating of fluorescent orange cheese powder, as some parts of the kernels had a bright orange tint to them, while some nearly white areas were only slightly covered with cheese.

The kernels were smallish for the most part, but they were crisp and had a very good cheddary taste. Not as great of a taste as some of the white cheddar popcorns (including Jolly Time's own) but definitely a step above the typical orange cheese popcorn. Our tasters munched through a lot of this popcorn as they kept returning for seconds and thirds.

From the package: “Pour on the cheese! Once you try you won't be able to resist the big, tangy cheese taste of The Big Cheez® Pop Corn. We've taken our crispy, white pop corn and coated with an extra cheesy, extra rich, real cheddar cheese topping to bring you The Big Cheez.

This snack was contributed to Taquitos.net by the manufacturer. Review published February 2008.