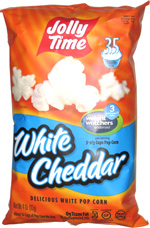 Taste test: This bag of popcorn was filled about two-thirds of the way with very bright white kernels, generally middling in size. Expectations for a serious intensity of cheese were high after sniffing the bag and being very impressed.

But when we crunched in, there was much less cheese taste than anticipated. The popcorn had a middling crispness, not quite mushy but far from crisp, with an even mix of popcorn and mild cheddar to taste. Unlike some Smartfood-style popcorns, this didn't leave much in the way of cheese residue on the fingertips, but then again, there wasn't that much cheese. Not bad, but far from the best white cheddar popcorn we've tried.

From the package: “It's what you've been waiting for! The taste of aged white cheddar delicately distributed on fluffy white kernels is snacking at its best! Plus, it's popped in sunflower oil, made with non-GMO kernels and endorsed by Weight Watchers™.”

This snack was discovered by Jeremy at Market Basket. Review published June 2015.