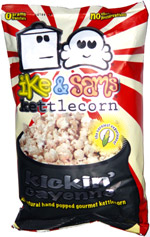 Taste test: This kettle corn had an excellent crispness and was quite tasty, but the level of cayenne pepper was quite a bit lower than we expected from the name.

The balance of sweetness/saltiness varied from one kernel to the next, but it was a bit less sweet than salty overall. At first, most tasters couldn't notice any cayenne pepper at all, but it appeared that it depended on which kernels they happened to grab. A careful look a the kernels for some telltake orange allowed us to successfully identify the kernels with cayenne pepper. Even those kernels weren't exactly "kickin" but the pepper did add a slight twist to the taste. There was a slight hot aftertaste left behind, but nothing major. Very good kettle corn, just not much of a cayenne kick.

Smell test: Good kettle corn smell. No hot peppers that I could notice.

From the package: “all natural hand popped gourmet kettlecorn” ... “Here at Ike & Sam's, we love hearing from the fans! The idea for Kickin' Cayenne came to us in a fan e-mail (Thanks, Stave!) and wow, what an idea! Our sweet and salty kettlecorn gets a kick with a dose of cayenne pepper! This stuff is peppery bliss!”

This snack was contributed to Taquitos.net by the manufacturer. Review published June 2008.