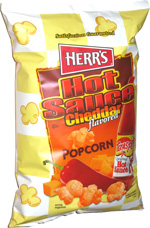 Taste test: This popcorn had a nice covering of bright orange seasoning, though there were some large unseasoned white sections on some of the kernels.

The flavor wasn't all that hot when I ate the first few kernels, though it was quite tasty, with a tangy bit of cheddar on some very nicely crisp popcorn kernels. It was tasty enough that I wanted to eat more, and it started to heat up a bit after the next few kernels, then it got pretty hot after that. Very tasty, nice heat. Great popcorn!

From the package: “Fresh air-popped, cheddar flavored and then hit with a hearty shake of genuine Texas Pete® Hot Sauce flavoring. Meet the popcorn that packs a punch.”