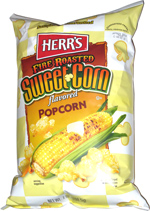 Taste test: This bag contained large popcorn kernels with a light yellow coating on most of the surfaces, with the other areas remaining white.

It was a little odd to hear "sweet corn flavored popcorn" as it seems intuitive that corn is supposed to taste like corn in the first place. However, when we crunched in, we got just what was promised, with a definite and really nice sweet corn flavor, quite different than regular popcorn, though a milder taste than we've had in some other sweet corn snacks, including Herr's own sweet corn-flavored potato chips. The kernels were crisp, and the bag was filled very nearly to the top with them. Very good!