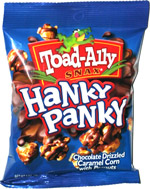 At the top of the bag, there were several clusters of multiple popcorn kernels stuck together, but below, it was just individual kernels. The taste was good, with fairly crisp kernels generously coated in caramel with a good helping of chocolate on every kernel. As far peanuts, I went most of the way through the bag without tasting any, but I did come across a few kernels toward the bottom of the bag that had a peanut attached, and that definitely added something to the taste. My guess is they're going to sell a lot of these snacks just because of the "Hanky Panky" name, and though it fell short of spectacular, it was pretty good.

Smell test: Good caramel and chocolate smell, but not much in the way of peanuts.

From the package: “Chocolate Drizzled Caramel Corn with Peanuts”