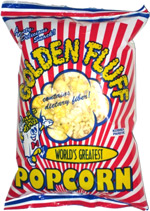 Taste test: This bag was filled to the brim with about an even mix of white and slightly yellow popcorn kernels.

I crunched right on in and found the the kernels were fairly crisp — none were mushy at all, just not the very crispest either. The taste was a bit on the bland side for the first few kernels, as there wasn't much salt to bring out the flavor, but that did improve as I ate more. I ended up not stopping until I had eaten over half the bag, so it was pretty good. The bag's claim of being "World's Greatest Popcorn" is certainly an exaggeration, but it was good popcorn.