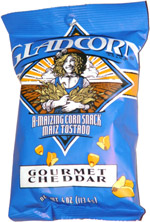 Taste test: This snack consisted of unpopped and partially popped corn kernels, and though the appearance of the partially popped pieces was odd, our tasters raved about the flavor and texture.

There was a nice (but not too hard) crunch, and it was the corn flavor that impressed the most, as there was not enough cheddar taste to even be noticed. The partially popped kernels had a better texture and a better taste than the unpopped ones, and the overall mix was much enjoyed by our tasters.

Smell test: Kind of like the smell of Smartfood or other cheddar popcorns, but with more popcorn smell and less cheddar.

From the package: “We never intended to create a snack food. It was simply an amazing discovery made one evening in our farmhouse kitchen. After tasting it, we thought it had potential, so we shared it with some friends. With their encouragement, we made more and a dream was born. Now we have the privilege of sharing this snack with you!”

This snack was contributed to Taquitos.net by the manufacturer. Review published February 2007.