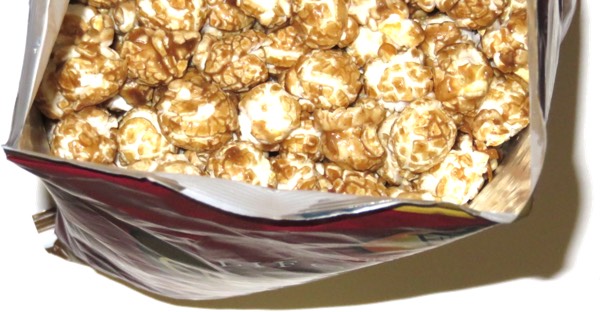 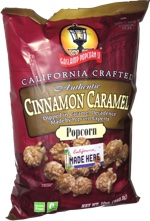 Taste test: This bag was filled about three-quarters of the way with fairly large, round kernels, with a level of caramel coverage that varied. Some of the kernels looked like the ones pictured on the bag, with nearly full coverage, while others had some areas of bare white popcorn showing through.

I poured a bunch of kernels into a bowl and crunched in to find a very tasty mix of cinnamon and caramel, not extremely cinnamon-y, but strong enough that it was noticeably different from standard caramel corn. The texture varied somewhat, as some kernels had a very light and airy feel beneath the cinnamon coating, while others were a bit chewy. The coating varied too, as it felt noticeably thicker on some kernels. Still, all of the kernels were nicely tasty. Good popcorn!

From the package: “California Crafted” ... “Dipped in Caramel Decadence” ... “Made by Popcorn Experts” ... “We're popcorn fanatics! Isn't everyone? We started making our popcorn in a retail shop in San Diego's historic Gaslamp District in 1998. Over the last decade, we've become one of America's old-fashioned snacking favorites. Take a pop, and you'll see why. Gaslamp Cinnamon Caramel Popcorn is made in small batches using brown sugar, cinnamon, popcorn, and just a pinch of sea salt.”

This snack was discovered by Jeremy at Harvest at Mendosa's, Mendocino, California. Review published .