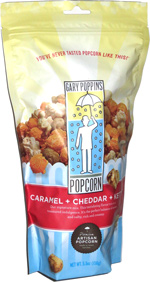 Taste test: The bag provided a bit of a twist to the usual popcorn combinations, as caramel corn and cheddar popcorn are usually included (sometimes along with butter popcorn), but kettle corn is not.

When we opened the bag, there was no confusion about which kind was which. The caramel corn had a light brownish glaze, the cheddar corn a fairly strong glow of bright orange, and the kettle corn mostly white but with many darker husk areas and some shiny spots. Also, while the caramel corn and cheddar corn had round kernels, most of the kettle corn was butterfly kernels.

We crunched in to find that the individual tastes were quite excellent, and the various combinations quite nice too. The kettle corn had a light sweetness with minimal salt, the caramel corn quite a bit more sweetness and some crunch, and the standout was the bright orange cheddar. The cheddar ones were a bit soft but had a cheese flavor that was intense and sharp — far more so than we typically get from orange cheddar popcorn. Very nice mix!

Smell test: Very nice. The cheddar was the most noticeable part.

From the package: “You've never tasted popcorn like this!” ... “Our founder Gary loves popcorn! He always has, ever since he was a kid and his parents would take him to the movies. Sometimes he didn't even care what the movie was, as long as he got his popcorn.”

This snack was discovered by Jeremy at Target. Review published June 2015.