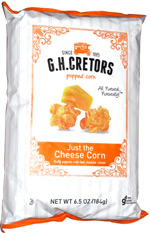 Taste test: This cheese popcorn consisted of round kernels with a middling level of orange seasoning.

Our tasters crunched into the kernels to find a good crispness, soft feel and a nice helping of cheddar. Several tasters thought that the texture was too soft, without enough crunch, but people generally did like the taste.

From the package: “All Natural ... Naturally!™” ... “It all began in 1885 when Great Grandpa Cretors invented the popcorn machine and our family began perecting the art of popping corn. This 'modern machine' appeared at the Chicago Columbian Exposition in 1893, and for five generations we've followed in his corn-popping footsteps, taste-testing recipes around our kitchen table”

This snack was contributed to Taquitos.net by the manufacturer. Review published October 2011.