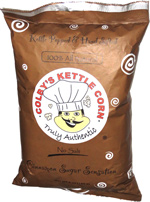 Taste test: This kettle corn strayed quite a bit from the standard sweet-and-salty formula. In fact, it said right on the front of the bag that there was no salt! The kernels were generally large and had a wide variation in the concentration of brown cinnamon spots, with many mostly white while a minority were quite cinnamony-looking.

We crunched in to find that there was generally a low level of cinnamon sugar and almost none of the subtle sugary crunch of kettle corn, but it was still pretty good. The darker ones did have some subtle sugary crunch, plus much more flavor, but for the most part, the texture was more like popcorn than kettle corn, especially for the lighter kernels. The cinnamon was enough to make it stand out a bit.

From the package: “Truly Authentic” ... “No Salt” ... “Colby's Kettle Corn has created an unmatched technique that allows us to produce the highest quality cover kettle corn in the world! If you like churros, you'll love our Cinnamon Sugar Sensation. This inspired crave is packed with healthy advantages! Our low sugar, no salt recipe is great for those who need to watch their intake. Our cinnamon sugar mix has been perfected to complement our unique butterfly popcorn.”