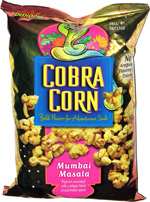 Taste test: The popcorn in this bag had a light orange overall color, with some darker orange seasoning spots.

The popcorn wasn't particularly crisp, but it was loaded with a lot of Indian spices, which were fairly intense and grew hotter in the aftertaste. It was quite a change from your usual popcorn flavoring. We shared it with a wide array of snackers, and the reactions were quite polarized. Nobody said "meh" — about two-thirds of the people who tried it liked the taste a lot, while the rest found the flavor to be entirely objectionable.

Smell test: Mostly like taco powder, but also with some Indian spices.

From the package: “Bold Flavors for Adventurous Souls” ... “Popcorn seasoned with a unique blend of east Indian spices” ... “This unique Mumbai Masala recipe was created by a dedicated doctor and creative mother of 4 children, in her own kitchen. When her son went to college, his roommates and friends found her popcorn to be so addictive, that he would return home from class to find them happily devouring the latest batch she had sent him!”

This snack was contributed to Taquitos.net by the manufacturer. Review published August 2012.