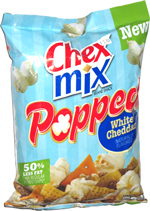 Taste test: This version of Chex Mix was supposed to combine some of the usual elements of Chex Mix with popcorn, so we were quite surprised when we opened the bag and looked inside that there was just a whole lot of popcorn staring back.

Was there some kind of mistake? Apparently not, as it turned out that there was indeed some other stuff, but the white cheddar popcorn had floated up to dominate the top. Despite the claims of the bag's marketing copy that this was like taking Chex Mix and mixing it with popcorn, the Chex Mix portion was quite abbreviated here: Just Corn Chex, Wheat Chex and some triangular cheese crackers. No pretzels, no bread sticks, no melba toast. The popcorn was pretty good, with a good crispness and a nice helping of white cheddar. Not the very best white cheddar popcorn out there, but far from the worst. The two kinds of Chex added a nice light crunch to the mix, and the cereal pieces did seem to have some cheddar on their surfaces too. The cheese crackers were kind of disappointing, as they had a really flat texture, with no crunch. Overall, a pretty good mix.

From the package: “The Best of Both Snacks! Can't choose between your favorite snacks? Now you can have both in one great tasting wholesome combo. Chex Mix® Popped is a perfect blend of light and airy popcorn and crunchy Chex Mix pieces.” ... “Part Chex Mix. Part Popcorn. Totally Delicious.”

This snack was discovered by Jeremy at Target. Review published May 2014.