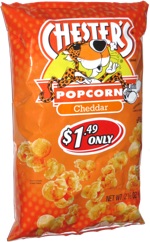 Taste test: I bought this bag figuring it was going to be a fairly ordinary cheese popcorn — marked to sell for $1.50 but actually priced at $1, like everything else at Dollar Tree. Then I checked out the back of the bag and read some old-school, over-the-top Chester Cheetah hype marketing copy, which raised my expectations considerably.

I opened the bag to find that the kernels were generally smallish and had a good helping of bright orange seasoning on the surfaces, giving them a nice mild orange glow. The bag was filled about 60% of the way, which isn't great, but it's more than some other popcorn we've had recently. I poured a bunch of kernels onto a plate, grabbed a handful and crunched in to find that there was a good crispness and very nice cheese flavor. Not anything fancy, just solidly good cheese popcorn with good texture and very good taste. I ended up refilling that plate three more times and eating about three-quarters of the bag in one sitting. So it was pretty good.

From the package: “The hippest kitty of the city, Chester Cheetah®, knows the fine cheddar makes popcorn taste better. So Chester Cheetah®, the Great Orange Hunter, has lent his name to the only popcorn snack this worthy of the fame. It's Chester's® brand Cheddar Popcorn. Chester Cheetah® says it's the top of the pops to pick, because it seizes those real cheese seasonings and adds a little pop and zing. Until now, package top was a hair too square. Too pooped to pop.” ... “Popcorn Enlarged to Show Texture”

This snack was discovered by Jeremy at Dollar Tree. Review published July 2016.