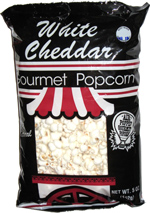 Taste test: This cheddar popcorn had a fairly bright white color, and the kernels were generally fairly large.

We crunched in to find a very nice crispness and lots of tasty mild cheddar cheese to go along with the popcorn taste. The cheddar seasoning did leave some residue behind on the fingertips, but quite a bit less of it than many other white cheddar popcorns, such as Smartfood. Our snackers were big fans of this, singing its praises as they crunched through many handfuls.

This snack was discovered by Jeremy at Kmart. Review published November 2013.