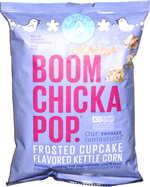 Taste test: This bag was filled less than halfway with large kernels that had some shiny areas, plus some occasional colorful sprinkles attached. Many of the kernels were stuck together into clusters of two or three.

I grabbed a cluster and crunched in to find that in addition to those shiny sugary kettle corn areas, there was quite a bit of frosting too, but it wasn't obvious on sight because the frosting was white. The popcorn was crunchy and sweet, with an unusual taste from the frosting. As I shared the bag around among quite a few snackers, three people independently identified that frosting flavor as being just like Lucky Charms cereal.

From the package: “contains nothing but ingredients you'll love.™” ... “It's time you had a fairy snackmother.®” ... “Snacking is the best part about life. It should be both delicious and carefree. Like magical yoga pant material, or weird nail polish colors. That's why Angie's set out to make a tasty treat that satisfies without triggering post-snack guilt.”