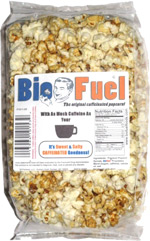 Taste test: This caffeinated kettle corn had a wide variation of sugar levels from one kernel to the next, so rather than having a mix of salt and sugar on each kernel, it seemed almost like each one had one or the other.

It tasted pretty good, with good crispness and a decent mix of sweet and salty. It wasn't quite a top-tier kettle corn in terms of taste, but people liked it and ate multiple handfuls. One taster said that there was some fake-butter taste too, and others noticed a caffeine taste in the aftertaste, like they'd just drank a Coke. The big draw here was the caffeine, so two of our coffee addicts each ate two handfuls (probably less than half a serving, if you go by the label) and then went back to work. The first one returned about four minutes later and reported that there was definitely lots of caffeine in her two handfuls, as she was feeling some serious buzz. The other didn't notice much of an effect.

From the package: “It Tastes Awesome! Sweet, Salty & Addictively Delicious!” ... “Ingredients: Premium Popcorn Kernels, BioFuel Kids© Proprietary Blend (sugars), canola oil, salt” ... “These statements have not been evaluated by the Food and Drug Administration. This product is not intended to diagnose, treat, curt or prevent any disease.” ... “Warning package may contain unpopped kernels”