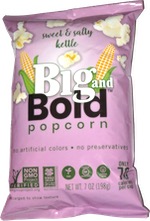 Taste test: This popcorn had a slightly off-white color, with some occasional shiny spots that were presumably sugar. The very large bag was just over halfway full. The kernels were generally pretty average in size as popcorn goes, not the extra-large size that I expected from the name — but if you want to compare them against Pipcorn, then sure, they were big.

I grabbed a handful of kernels and crunched in to find that most of the pieces had a light sugary crunch, plus the expected sweetness to go along with it. Salt seemed to be generally less evident than sugar, but there was the occasional bit of it to balance things out — including a few kernels that were positively loaded with salt. More even distribution of salt and sugar would have made these even better, but still a solidly good kettle corn.

From the package: “Go big and bold for a tasty and better for you snack without compromises!”