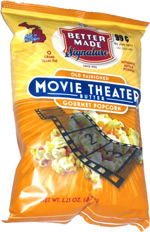 Taste test: I opened this bag and was a bit surprised to find that this butter-flavored popcorn didn't have any of the yellow color typical of buttered popcorns, as all of the popped kernels were quite uniformly colored and not yellow.

I grabbed a handful and crunched in to find that it did have a good buttery taste and a good saltiness, but I was disappointed to find that the kernels were not particularly crisp. They weren't mushy or anything, nothing that bad, but they definitely had less crispness than other good bagged movie theater popcorns, such as recently reviewed versions from Lance and Snyder of Berlin so they weren't nearly as good as those.

From the package: “For your eating enjoyment, our Old Fashioned Gourmet Movie Theater Butter Popcorn is kettle popped in the finest oils, contains 0 grams of Trans Fat and is flavored with the highest quality seasonings.”

This snack was discovered at Snaxpo. Review published April 2011.