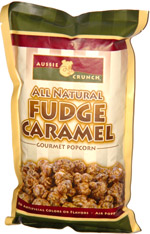 Taste test: This bag was filled just about halfway with large, nearly round kernels with a dark fudge coating covering most of the surface.

When I crunched in, the thin, sweet layer of fudge tasted good, as it added a crisp outer shell to the popcorn, a definite contrast in texture to the light and airy popcorn inside. On most kernels, the coating broke apart easily when it hit my teeth, but there were a few kernels that required some more active chewing. The coating tasted like a chocolate fudge to me, fairly mild and not overly sweet, but I didn't taste much in the way of caramel. Thankfully, the fudge/caramel coating was smooth and didn't stick to my fingers at all. Pretty good.

From the package: “It happened on a hot, muggy summer morning that a pirate ship (you hears me!) landed on the shores of Australia. It carried rare herbs, spices and candied flavours like caramel, fudge, cinnamon and mint. As soon as those pirates landed, they saw it. There on the beach were hundreds, no thousands, no millions of ears of corn popping like crazy in the midday sun. Nobody knew how they got there, nobody ever dared ask.”