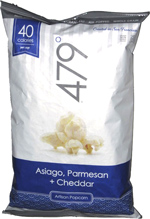 Taste test: This bag was filled about halfway with fairly large kernels, and we were surprised that a popcorn that promised three different cheeses had no seasoning visible on the surfaces.

We crunched in to find a pretty good crispness and a very mild cheese flavor to go along with a good fresh popcorn taste. The cheese was flavorful, but there really wasn't much of it if you ate only a few kernels. So we tried eating a whole bunch of kernels at once, and that did kick up the cheese level a notch. Still, far less cheesy than most cheese popcorns, but our snackers still did enjoy the flavor. But if you're going to use three kinds of cheese, why not crank up the cheese level a bit?

From the package: “I've always considered popcorn to be the perfect snack. I loved it as a kid, and that didn't change when I grew up and trained at Le Cordon Bleu in London. Later, as I experimented in my own kitchen, I discovered at 479° is the optimal temperature for popping, which sparked the idea for our company name.”

This snack was discovered by Jeremy at Target. Review published November 2014.