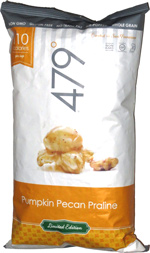 Taste test: This bag was filled about halfway with coated popcorn that looked absolutely nothing like the stuff pictured on the front of the bag. Whereas that showed large kernels with a light caramel color, the stuff inside was a rich brown, with some uncoated white areas showing through. Many of the kernels were stuck together into clusters, though generally there were no more than two kernels in each. There didn't seem to be a whole lot of pecans stuck to the kernels, at least not visibly.

We crunched in to find a nice soft feel and sweet mix of cinnamon sugar and pumpkin, though the pumpkin was fairly subtle. The coating did leave a lot of sugar on the fingertips. Pretty good.

This snack was discovered by Jeremy at bfresh, Allston, Massachusetts. Review published October 2015.