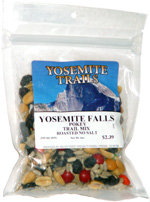 I didn't even notice the sunflower seeds at first, because despite being the most plentiful element in raw numbers, they had all sunk to the bottom of the bag. The sunflower seeds were generally fairly large as sunflower seeds go, but still they were smaller than everything else in the mix. It was a nice mix with a good balance of sweet and salty tastes, and thankfully, they didn't load this one up with all kinds of weird nuts.

This snack was discovered by Jeremy at Yosemite National Park. Review published June 2008.