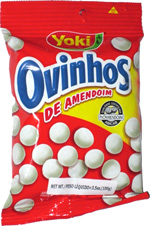 Taste test: Since I'm illiterate in Portugese and didn't notice the English ingredients sticker on the back, I incorrectly assumed they were some kind of white chocolate candy. It turned out that they were peanuts coated in starch, which would make them similar to several other snacks we've tried, but these were different in several ways. First, the coating was white, versus the typical beige sorts of colors that others have been, and second, there was no special seasoning on them. The starch coating was also thicker than usual.

When I crunched in, all that I tasted was the peanut, but there was also lots of crunch from the coating. Tasty and good.