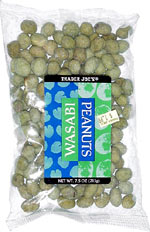 Taste test: These are a variation on the wasabi-covered peas sold by several different companies.

You don't really taste that much peanut, so the flavor isn't that much different from that of wasabi peas. Unlike the wasabi peas, where wasabi typically covers only parts of the surface of the pea, in this case the wasabi covers the entire surface of these peanuts. If you bite into these, the wasabi taste isn't particularly strong. But if you instead suck on them, you get a fairly impressive wasabi kick that lasts for a little while. Good stuff!

From the package: “Serving Size about 20 pieces (about 28g/1oz) Servings Per Container about 8”

Trivia: Trader Joe's SKU for this product is 36519

This snack was discovered by Jeremy at Trader Joe's. Review published July 2002.