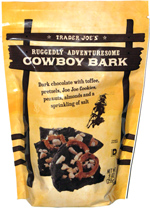 At about 1/4-inch thick, there was plenty of substance to the chocolate to hold lots of stuff inside it on the surfaces. There were two categories of stuff: large and small. The two large types were broken thin knotted pretzels and Joe Joe's (better known as Oreos); the smaller pieces were crushed peanuts, crushed almonds and toffee bits. It was all quite good, with a lot of dark chocolate, plus a variety of textures and tastes from al the other stuff. Our snackers grabbed pieces (sometimes breaking them in two first because they were so large) and quickly ate them, as everyone loved the taste and texture. Great!

Smell test: Dark chocolate and peanuts were the aromas that stood out. Nice.

From the package: “Dark chocolate with toffee, pretzels, Joe Joe Cookies, peanuts, almonds and a sprinkling of salt” ... “The amazing and unexpected combination of flavors and toppings are the only thing that's refined about Trader Joe's Cowboy Bark. It's as rugged and a venturesome as the quintessential cowboy from whom it derives its name! One bite and you'll be lassoed....”

This snack was discovered by Jeremy at Trader Joe's. Review published January 2014.