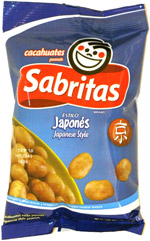 Taste test: These peanuts were coated with thin a flour-based shell and mildly flavored with soy sauce.

The coating was a bit thinner and denser than what we've tried with other Asian peanut snacks, and the weird part was the crunch levels. Rather than having a consistent level of crunch, it actually varied greatly from one peanut to the next, with some very crunchy (maybe too crunchy) and others having a mild crunch. The inconsistency of crunch was a bit jarring. There was a mild level of soy sauce spice with a bit of heat, but it was hardly noticeable to most people. You really had to suck on the peanuts rather than crunch in to get that flavor. One of our tasters cringed on her first bite but ended up liking these a lot, while our other tasters were enthusiastic all along but raised concerns about the odd crunch.