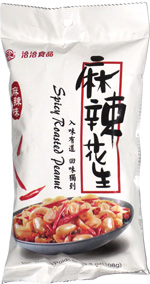 Taste test: This bag of peanuts highly resembled another kind recently reviewed, Huang Fei Hong Spicy Peanuts, as both bags were white, originated in China, and the picture on this one depicted peanuts combined with red slivers of peppers and peppercorns, which was what was in the other bag.

I opened it to find plenty of yellowish-looking halves of peanuts, but the various spiced bits were only slightly in evidence, far less so than the other kind. Even after shaking up the bag several times, it was clear that there was much less of the non-peanut content. I grabbed a handful of nuts that included some bits of the other stuff and crunched in to find that despite the relative scarcity of spicy stuff to see, there was plenty to taste. The peanuts had nice soft crunch, and the other stuff delivered a bit of crunchiness and lots of tasty heat. Very nice!