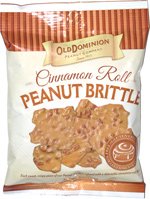 Taste test: The stuff in this bag of peanut brittle looked a lot like ordinary (non-cinnamon) peanut brittle. When I crunched in, the first bite into the thick brittle seemed like that as well, as the big crunch came with an initial taste that had lots of sugar and peanut but no cinnamon.

However, soon thereafter, there was a nice mild cinnamon flavor that emerged. It wasn't intense cinnamon, nor hot cinnamon, but it did taste a lot like the cinnamon sugar in a cinnamon roll, so the Cinnamon Roll name fit well. Not all that different from ordinary peanut brittle, but a nice little change for folks who like cinnamon.

From the package: “With each sweet, crispy bite of cinnamon roll flavor, and the wholesome goodness of peanuts, you'll be sure to come back for more!”