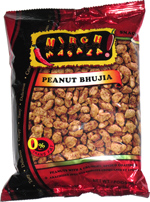 Taste test: These coated peanuts had somewhat wiggly shapes thanks to the uneven coating, with a mix of light orange and dark orange areas on the surfaces. The intense orange color on the actual nuts was very much unlike the bland beige shown in the picture on the bag. Some of the nuts were stuck together into clusters of two or three. We've had lots of kinds of coated peanuts, many of them promising chili pepper heat, but many had just a slight kick, if any. With their Indian heritage, we were expecting a lot more from these. 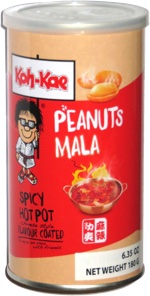 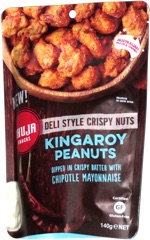 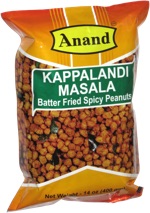 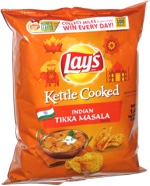 We crunched into a few nuts to find that they delivered — and more — on the promise of heat, with some major, serious kick. There was a nice crunch from the coating, good peanut taste and some spices at first, then the heat grew and lingered. The mix of Indian spices was quite tasty, and did we mention that it was hot? Some of our snackers had just one nut and felt enough heat to be done, while others were daring and dove in by eating a whole handful or even two, for quite the kick. Many snackers were shocked by the heat level, and even our heat seekers found it impressively hot while praising the taste and intensity.

Smell test: Spicy but not overwhelming.

This snack was discovered by Jeremy at Foodland, North Cambridge, Massachusetts. Review published .