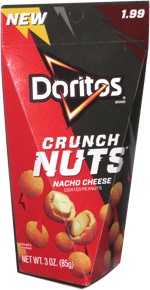 Taste test: This snack's existence surprised the heck out of me — the package said "Doritos" but it was much farther from my understanding of what constitutes Doritos than any of the 125 kinds previously reviewed. These were starch-coated peanuts, a type of snack with which we're quite familiar, but one entirely unlike a flavored tortilla chip. The other ones have been coated in a number of different starches (often wheat or potato), so I crossed my fingers as I checked the ingredients, hoping that it would at least be corn this time. Good news, it was!

The packaging was quite odd, with a shape we've never seen before and instructions on what turned out to be a clunky way to re-close it but none on how to open it in the first place. (Folding the perforated cardboard top back and forth several times and then ripping it off with some effort did the trick. Inside the cardboard was a foil layer, which likely gave it a better seal, but made opening not so easy.) The coated nuts varied a lot in size, and they had a partial coating of a light but bright orange powder.

I crunched in to experience a bit of a pop from most pieces. The initial taste was more peanuts than cheese, but there was some cheese, and I did notice a vaguely Doritos-like taste afterward, as the corn-based coating and cheese made the snack at least slightly worthy of the name. Not very different from other coated peanuts, but still almost as different as I imagined from the Doritos brand.

Smell test: Definitely different from Doritos. Could smell something like peanuts but not any nacho cheese.

This snack was discovered by Jeremy at 7-Eleven. Review published February 2018.