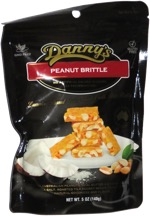 Taste test: This peanut brittle was a bit thicker than the typical ones, and it was cut into smallish pieces that were generally squarish but came in other shapes too. It had a typical peanut brittle color and lots of peanuts embedded inside.

I crunched in to find that it was crunchy and solid, as you'd expect from peanut brittle, but not quite as hard as most kinds. The taste was very good, with lots of sweetness and lots of peanut taste. I ate quite a few pieces, one after the other, and it was quite satisfying.

From the package: “Luxurious Peanut Brittle roasted with Real Butter” ... “No artificial colors, flavors or preservatives” ... “Premium Australian peanuts, real butter a dash of coconut and sea salt, roasted to a secret recipe to seal in the natural goodness and flavor” ... “Made in Australia”

This snack was discovered by Jeremy at Grocery Outlet. Review published .