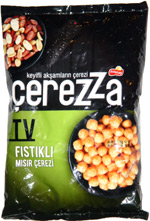 Taste test: These were kind of like cheese balls without the cheese, as they were corn-based snacks with the same texture as cheese balls, with a brownish orange color.

The taste was sort of like peanut butter, but it wasn't an intense taste at all, definitely on the weak side. Most of our tasters thought that the taste was OK or tolerable, and a few some somewhat disliked the taste, but nobody though it was really awful.

Smell test: Sharp smell, not quite peanuts, but hard to place.

This snack was discovered by Leesa in Turkey. Review published November 2008.