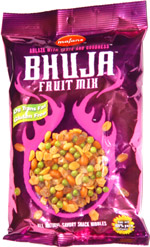 Taste test: This mix included peanuts, sultanas (kind of like raisins), peas, dates, paw paw and apricot, plus some spices.

The dates and paw paw were sweet and tasty, with some unexpected heat mixed in. The peanuts were good, a bit soft and mildly spicy. The peas had a nice crunch and very tasty spices at first (then after that, they tasted like peas, so not so much). An odd mix, but tasty and spicy.

Smell test: Smells kind of like spicy peanuts, but with some extra spices too.

From the package: “Ablaze with taste and goodness™” ... “Spice Up Your Life with Majans Fruit Mix — the tasty, all natural snack that's great for a nibble anytime. An Indian family favorite, the origin of Bhuja mixes and spices dates back many, many years and each household has its own recipe.” ... “Made in Australia”