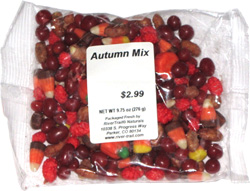 Taste test: This mix included two kinds of candy corn (one that was yellow/orange/white from top to bottom, the other brown/orange/white); something made from a similar material to candy corn, but shaped like the top of a pumpkin; Boston Baked Beans; French Burnt Peanuts (which looked kind of like raspberries) and toffee toasted peanuts.

It was a very sweet mix. There was a lot of crunch in the French Burnt Peanuts and Boston Baked Beans, but surprisingly, the toffee peanuts had a very soft feel. The candy corn was soft as you would expect. An odd mix of textures. I bought this mix to bring on a strenuous hike but ended up not needing it (I stuck to beef jerky and gatorade) and ate it later. As it turned out, that was probably a good thing, as it was was just too candy-focused for a trail mix. I liked the colors, but I was really not that excited by the mix.

This snack was discovered by Jeremy in Durango, Colorado. Review published .