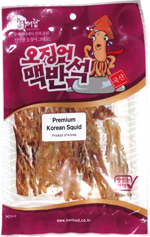 The pieces were fairly thin but felt substantial, as it felt like multiple strands woven together. We bit in to find a jerky-like texture (though it was thinner than most jerky) with just a mild flavor — fishy, yes, but not in a bad way like some kinds of squid we've tried. Because it was squid, most of the snackers who were offered some didn't want to even try it. But all of those who did (admittedly, a self-selected group more willing to like squid) though it was pretty good as squid goes. Some were even willing to chew their way through multiple pieces.

Smell test: Not good, definitely smelled worse than it tasted. Kind of like dog food. But also kind of like fish food.