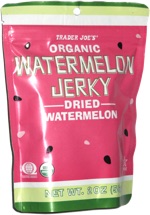 Taste test: This one sounded weird, so I had to try it. The "jerky" consisted of very thin slices of dried watermelon, and it looked pretty much just like that, with seeds included. Most of the pieces had the intense red of a watermelon, but some were largely white, or a mix of red and white, so apparently they included that stuff near the rind that generally goes uneaten.

I bit in to find a chewy feel that was indeed jerky-like, though nobody would actually mistake the texture for meat. It had an intense watermelon flavor, very sweet (despite no added sugar!), though less intense for the white pieces. Much like real water-filled watermelon, it left some sticky, sugary stuff on my fingers!

This snack was discovered by Jeremy at Trader Joe's. Review published September 2020.