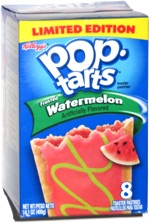 Taste test: This was one of the crazier Pop-Tarts flavors we've heard of, so it definitely seemed worth a try. Most of the top surface of each piece was covered with a pink frosting, a good match for watermelon's inside color, with some squiggles of green frosting that were a good match for the outside. The filling was redder than the frosting, but still well within the watermelon range of color.

For my taste test, I toasted one Pop-Tart and kept another one cold and then alternated between the two along with sips of cold milk. The untoasted one had a taste that was somewhat watermelon-like, though sweeter and obviously less watery. The toasted one had a much stronger watermelon flavor. Even the aftertaste reminded me of watermelon. I shared around untoasted pieces of the remaining Pop-Tarts with some friends, and most people thought they were pretty good. Two people independently declared that they tasted like Jolly Ranchers.

Smell test: It first, it smelled mostly like the Pop-Tarts dough, but on third whiff, I could detect an actual watermelon smell.