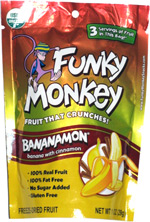 Taste test: These banana chips were light, crispy and very crunchy, and they were absolutely loaded with banana flavor (even more of it than just eating a banana).

The Bananamon flavor was supposed to combine banana with cinnamon, and though there was some visual evidence of cinnamon on the surfaces of some of the chips, we couldn't taste much cinnamon, if any. The chips did leave behind kind of a mushy feeling of banana stick to the teeth. Banana chips are usually pretty bad (would rather just eat a good banana), so these far exceeded expectations by being quite good.

From the package: “banana with cinnamon” ... “3 Servings of Fruit in this Bag!” ... “The Funky Monkey encourages you to discover the fun of fruit that crunches – a delicious, healthy snack with the taste and goodness of freshly picked, real fruit!” ... “Made in Brazil”