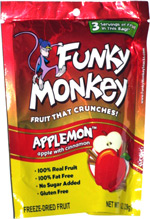 Taste test: This cinnamonized dehydrated apple snack consisted of irregularly shaped pieces of various sizes, most of them with a beige apple color on one side and cinnamon on the other.

Some of the pieces had some apple skin. We bit in to find a good crunch, more pronounced than most other snacks of this kind, and a good apple taste. We could definitely see some cinnamon on most pieces, but the taste of it was pretty much absent, even when tasters purposely took a piece that looked very cinnamony and placed it against the tongue. By contrast, the apple cinnamon snack from Today's Farm had a definite apple cinnamon (or apple pie) flavor. Still, a good light snack, with a nice texture and good taste.

From the package: “Fruit that crunches!” ... “apple with cinnamon” ... “The Funky Monkey encourages you to discover the fun of fruit that crunches – a delicious, healthy snack with the taste and goodness of freshly picked, real fruit! Natural and nutritious. The Funky Monkey believes that snacks should be the way nature intended, with no added sugar, preservatives, coloring or flavoring. Funky Monkey snacks are freeze-fried, a unique and modern process that maintains nearly all of the flavor and nutrients found in fresh fruit, unlike other types of fruit-based snacks!” ... “Kosher • Parve”