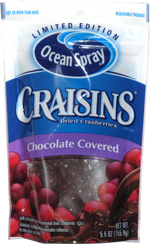 Taste test: These snacks chocolate-covered dried cranberries looked generally a lot like Raisinettes, with some odd shapes and generally a smooth milk chocolate exterior, but there was more variation in size than you typically get from Raisinettes.

The taste was really, really good, as our snackers were eager to try these, generally grabbed a good-size handful, and people had nothing but good things to say about them. We hope this isn't really just a limited edition!

Smell test: Kind of like Raisinettes, except sweeter. Definitely more chocolate than fruit.

From the package: “Limited Edition” ... “milk chocolate covered sweetened dried cranberries” ... “Just because you're eating healthy doesn't mean you have to ignore your sweet tooth! We've taken the real fruit of Craisins® Dried Cranberries and covered 'em in creamy milk chocolate for just the kind of indulgence we can feel pretty good about.” ... “Needs to refrigeration after opening”

This snack was discovered by Jeremy at Market Basket. Review published February 2013.