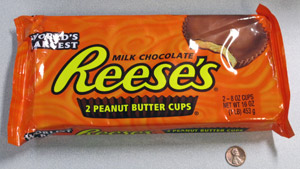 I've eaten a lot of Reese's in my life, but today was a banner day in my personal Reese's history.

My co-worker Robyn walked into the office holding The World's Largest Reese's, and once I understood the true gravity of what I was looking at, all I could think was, this is the greatest thing ever.

If The Chris Farley Show were still on the air, I'm pretty sure that Chris would be saying, "You remember that time they made a Reese's that weighed half a pound? That was awesome."

The picture above almost doesn't do this product justice, because the package looks a heck of a lot like a regular two-pack of Reese's. But it's a matter of scale.

The Nutrition Facts say that this is 12 servings, or 6 per cup, but any self-respecting Reese's fan should want to eat an entire cup in one sitting.