I found the Snack Squad!

What's a Snack Squad, and where are they? I had to find out 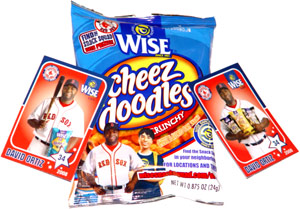 Fruits of the Snack Squad

The squad's Interweb-based schedule said that they were going to be at Boston's Aquarium Station on the MBTA Blue Line from noon to 6. That did seem an odd location for a Snack Squad to show up, as the plaza around the nearby New England Aquarium would seem a more logical spot, but since the decision had already been made to find the Snack Squad, I got going.

The Aquarium station has two entrances, one on Long Wharf right near the Aquarium and the other across the "Big Dig" surface roads on State Street. I figured it had to be the exit on the wharf. I kept my eyes open for an in-station Snack Squad as I headed toward the exit, but I saw nothing. Upon exiting the station at Long Wharf end, I looked around and found nothing resembling a Snack Squad. I ventured along the various touristy kiosks on the wharf to seek out the squad, but still no Wise. I headed toward the Aquarium, still nothing. Right in front of the Aquarium, the usual aquarium stuff and lots of tourists, but no Snack Squad.

I was ready to give up, but I figured I would cross over the Big Dig to the other subway entrance on the remote chance that there was a Snack Squad there.

I walked around the entrance once and didn't seen any kind of Wise kiosk, Wise van, or anything Wise, and I figured, that was it, no Snack Squad.

I looped around the entrance just to make sure I didn't miss it, and then noticed a few people in Wise t-shirts. They were very low-key, and if I hadn't come looking for the Snack Squad, I probably would never have noticed them. They seemed to be associated with some unlabeled van, presumably loaded with snacks. The squad members looked a lot like the folks pictured on the bag, with the major exception being the absence of David Ortiz, who was not present. (Big Papi is quite a big guy, so if he had been present, it would probably have been easier to find the Snack Squad.)

The Snack Squad folks didn't even approach me. I approached them and was offered a bag of Crunchy Cheez Doodles. I'm not the kind of person who would ever turn down a bag of Cheez Doodles, especially a bag with David Ortiz and the Snack Squad pictured on front, so I took it. I asked if they were doing some sort of Red Sox promotion, and then they gave me a Big Papi Scratch & Win baseball card. (For some reason, they didn't give me the card until I asked.) I scratched it and won a bag of Wise snacks. So they gave me another bag of Cheez Doodles. At that point, the Snack Squad wanted to take a picture of me and another prize winner, and I obliged. Since the big prizes involved Red Sox tickets, I asked for another card before leaving. Guess what, I won another bag of Wise snacks, though I didn't even bother to redeem it. (I suspect there are no actual losing cards.)