Wendys shows us the beef (and bacon) 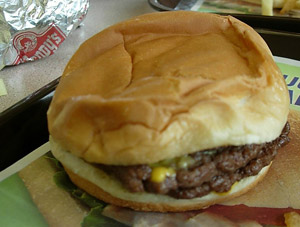 Mmmmm, that's a lot of meat. 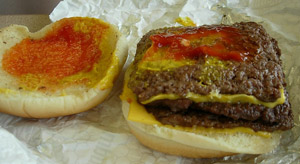 Surprise! The Triple Stack includes ketchup (or catsup) and mustard.

The Wendy's fast food chain entered the pop culture lexicon with its "Where's the Beef?" commercials in the '80s (although Walter Mondale made it even more famous in his 1984 debate with Gary Hart). The latest additions to the Wendy's menu might make it worth their while to start running those commercials again.

The new hamburgers include the Triple Stack, which includes three smaller hamburger patties (each the size of the Jr. Hamburger, as opposed to the 1/4-lb. Single) and two slices of American cheese. This $1.99 menu item has 570 calories and 30 grams of fat. (Can you feel your arteries hardening yet?)

But that's nothing compared to the Baconator, which includes six bacon slices, two 1/4-lb. hamburger patties, two slices of American cheese, and "mayonnaise dressing." The 830-calorie Baconator has 51 grams of fat. Ooof.

Since I want to reach my 40s, I tried the Triple Stack and passed on the Baconator. I didn't realize that the Triple Stack included ketchup and mustard — I thought it was just the burger and cheese. As I'm not a fan of mustard on burgers, it took a bit away from the sandwich. Still, if you're a fan of burger meat and cheese in every bite of your hamburger, the Triple Stack delivers.

In other Wendy's news, the chain recently switched its hamburger buns. On the "Classic" line all of the buns are now the same bun as the Big Bacon Classic — the one with the corn-meal-type dust on the top of the bun. The "regular, plain" bun is now just on the Junior hamburgers, cheeseburgers and the Triple Stack.

Also, the chain started offering onion rings. I tried some on a recent visit and the "small" size included about 4 onion rings. The reason? The onion rings are a lot bigger than the ones at Burger King. The rings were pretty good, very hot and not bad overall. But I still prefer the BK rings because they also offer the "zesty sauce."