I first got word that Taco Bell was selling taquitos while watching the Super Bowl pregame. Informing me was none other than Ricardo Montalban, who placed lots of extra accent on the words "carne asada" while promoting the Steak Grilled Taquitos.

Given my obession with taquitos, it goes without saying that I immediately drove to a Taco Bell to get one. (My trip was unsuccessful, as they had a minimum 30-minute wait to get any hot food, and I didn't get back to another Taco Bell one until a week later.)

The marketing for the Steak Grilled Taquitos asks customers to "Choose 1 Dip" among the choices of guacamole, salsa and sour cream. This is a problem. At a bare minimum, a taquito requires both sour cream and salsa, and ideally all three. How Taco Bell thought they could get away with just one, I can't imagine.

To get around this limitation, I got two orders of the taquitos, specifying guac with one, salsa with the other, and knowing full well that I would add a dollup of sour cream for the trifecta. The cashier seemed a bit confused by the whole order, as he referred to the Grilled Steak Taquitos promo sheet on the counter a few times as I explained my salsa and guac customizations, and he had to personally explain it to the taco preparation guy.

I had a great angle to watch my taquitos get made, and the recipe was quite simple. (Hope I'm not giving away any big Taco Bell corporate secrets here.) To make a taquito, you put some steak into a tortilla, cover it with cheese, roll it up and then place it in the grill.

All of the ads for the Steak Grilled Taquitos show two taquitos jutting out of a paper packet. In reality, one order consists of just one taquito, but they cut it in half. Once cut in half, the pieces easily fit entirely inside the packet, so the picture is kind of deceptive.

The taquitos were short of spectacular, but OK. They were quite a bit wider than your typical frozen taquitos, and more flattened than round, but I guess you could still call them taquitos. They didn't have quite the crispness of Taco's Bell's other grilled items, such as the Crunchwrap Supreme or Grilled Stuft Burrito. They definitely lacked the crispness of your typical frozen taquitos. The grilled steak tasted pretty much like plain grilled steak, so I have no idea what the whole "carne asada" thing was about. (Ricardo Montalban, if you're reading this, please contact me.) The pieces of steak were kind of tiny, definitely smaller than the ones in the marketing picture. The guac was a very, very pale shade of green and looked awful but tasted OK, with some spices in it, but still, a below-average guac. The salsa was very liquidy and mushy, with an OK taste, but again, well below average as salsas go. The sour cream was quite good (but it came from my own fridge). 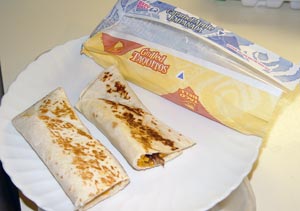 These are the taquitos, with the packaging envelope that they came in. (The same envelope is used for the Caramel Apple Empanada.) 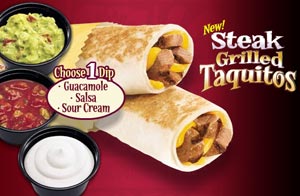 This is how Taco Bell is marketing the item. 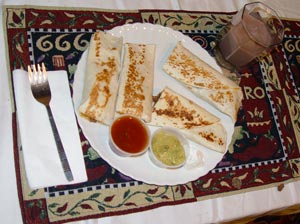 Here's my full place setting, complete with two orders of taquitos, all three dips and a glass of chocolate milk.