Can Taco Bell haunt us with Ghost Pepper?

08.25.2015
The timing could not have been better. A few days days after trying a small bit of raw ghost pepper, I saw an ad for Taco Bell's Dare Devil Loaded Grillers in three flavors, including Ghost Pepper!

Before discussing Taco Bell's offering, a bit about the Ghost Pepper: It's known as one very, very hot pepper, with heat measured at 1 million Scoville units, three times hotter than the formidable Habanero Pepper. The Stillman's Farm booth at the recently opened Boston Public Market sells Ghost Peppers, so when the Boston Brunch Runners planned a running/foodie gathering there, I put out a challenge for folks to give the pepper a try. Several people tried a thin slice (I personally had just a small bite of a slice) and we all agreed that it was quite hot, even with my tiny bite. The heat lingered for a very long time, and sipping a cold beverage or a eating ice cream provided just temporary relief, as the heat soon came roaring back.

Now here's an image from Taco Bell's website of the Dare Devil Grillers:

The "Dare Devil" part is that they're offering these Grillers with three different levels of heat, moving up the hot pepper scale from Chipotle to Habanero to Ghost. Notice here that they show foil wrappers in three different colors (which seems necessary, given the fact that the fillings look just about identical).

I chose to buy all three instead of just Ghost Pepper, to allow for some comparison (and because they were just $1 each).

According to Taco Bell's iPhone app, all three kinds include Seasoned Beef, Red Strips and Nacho Cheese Sauce. Each also includes an additional sauce corresponding to its particular pepper.

I got the order, sat down, opened the bag and found this: 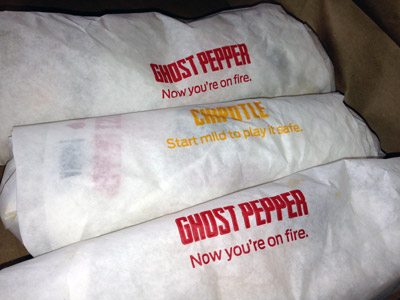 Well, that was unexpected. Did they screw up the order and give me two Ghost and one Chipotle? (Taco Bell has screwed up some orders before!) Was one of them just mislabeled? And regardless, what happened to those nice foil wrappers from the website? It seems that they not only didn't really have foil wrappers, they didn't even have different paper wrappers for the three kinds. It looked like they were all from the same stock, just intended to be folded differently to reveal the different flavors. 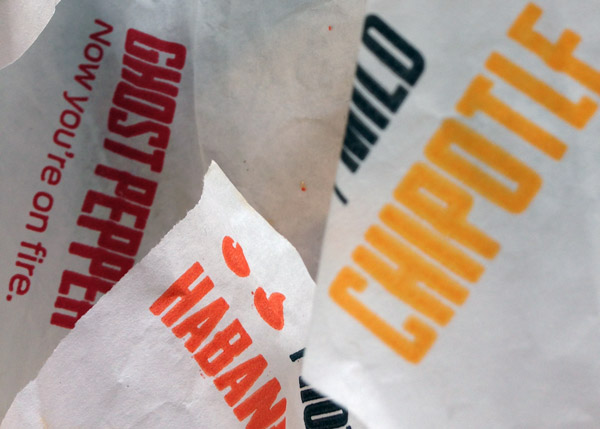 After unwrapping my first Griller, I confirmed that, yes, they were all packaged with one kind of wrapper. 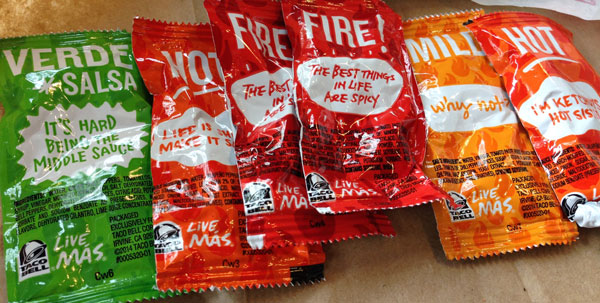 As a hedge against the Grillers not being flavorful enough, I had also picked up a full selection of Taco Bell's sauces. Years ago, Taco Bell used to have these freely available to grab, but in recent years you usually have had to specially request them at the counter. It seems they've moved them back to the good old days where you could just grab a bunch, so I did.

Hedging against too much heat, I also got a large lemonade from Taco Bell, and before going to Taco Bell, I had picked up a chocolate shake at Freshens. (Side note: If they were not the only ice cream place at the food court, there's no way that I would have gotten it at Freshens. What is the deal with that place?)

Now, onto eating the actual Grillers! I opened up the one that was marked as Chipotle. 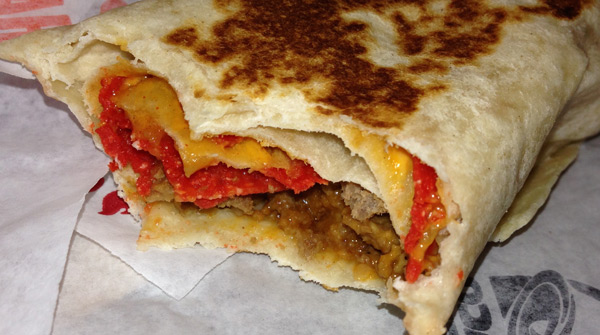 Here it is, after I'd taken one bite. As you can see, it has ground beef, some sauce and bits of red tortilla chip inside the grilled tortilla. As you can also see, it doesn't much resemble Taco Bell's promotional photo — there's much less stuff inside!

The taste was good, with a nice mix of beef and tangy cheese, and the chips added a nice crunch. As for heat, there was no heat of any kind. I figured (indeed, hoped) that with the lack of heat, this had to be the Chipotle one, so there would be lots more heat ahead.

Since the other two were both marked as Ghost, I figured I would go back and forth between the two to figure out which was which.

The next one I tried did indeed have some heat. Finally! Still some nice tangy cheese, and a significant, measurable heat. Nothing incredible, but fairly strong heat, certainly the hottest I've had at Taco Bell since the Volcano Taco. I opened up the last one and bit in to find a different taste than either of the first two — it wasn't the same sauce — but, as with the first, there was no heat.

Of the last two, the hot one (on the left) had an oranger cheese sauce, so at least according to Taco Bell's color key in their iPhone app, that was Habanero Sauce, and the non-hot one was probably Ghost Sauce. So the Ghost didn't have any heat at all, let alone Ghost pepper heat. Even if I'm not identifying them all correctly, none of them came anywhere close to the heat of that raw Ghost Pepper. That was HOT!

With no heat that I could not handle, the lemonade and chocolate shake were superfluous. (Of course, I finished them both anyway.)