Taco Bell has achieved great success over the past year with its Nacho Cheese Doritos-flavored Locos Tacos, so fans of Taco Bell have been eagerly anticipating the addition of a similar Cool Ranch version, based on the Cool Ranch Doritos chips. Personally, I liked the Nacho Cheese one, but my experience was spoiled a bit by the a convergence of many problems that are fairly typical of Taco Bell.

This time, I again ordered one regular and one Supreme. 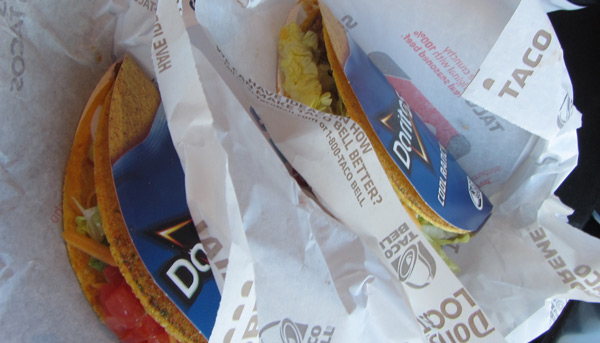 I was wondering whether they would be using the latest in Doritos branding, as the new Doritos logo started appearing on grocery shelves just a few weeks before the new Locos Tacos were scheduled to arrive. It turned out that they did incorporate the new logo. Mostly, anyway. The thin cardboard shell protector had the new Doritos look, along with some Taco Bell branding, but the white paper wrapper surrounding that (side note: was all that packaging necessary?) still had the previous version of the Doritos logo. 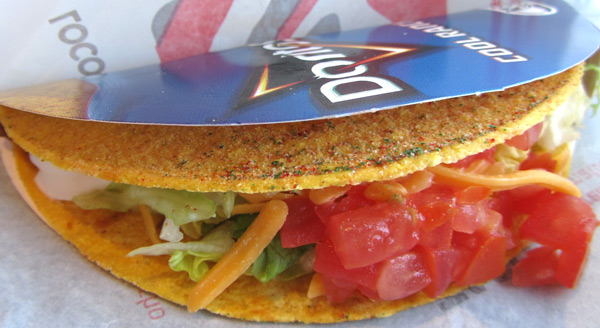 After removing the wrapper, I was impressed by how the tacos looked. The Cool Ranch seasoning was colorful and evenly distributed, giving the taco a sharp appearance. This one's the Supreme (note the tomato and sour cream) and I liked it a lot, as the sour cream was perfect to balance out the ranch seasoning

The non-Supreme one was also good, though not quite as filling and not as satisfying. I did enjoy the ranch taste. Typically what I'll do with a Taco Bell taco is douse it in lots of Taco Bell sauce, but the extra flavor from the Cool Ranch shell made that less necessary. (I actually had requested some of the Taco Bell verde sauce and planned to use it, but I forgot about it while eating these, then discovered four packets at the bottom of the bag when I was done.) 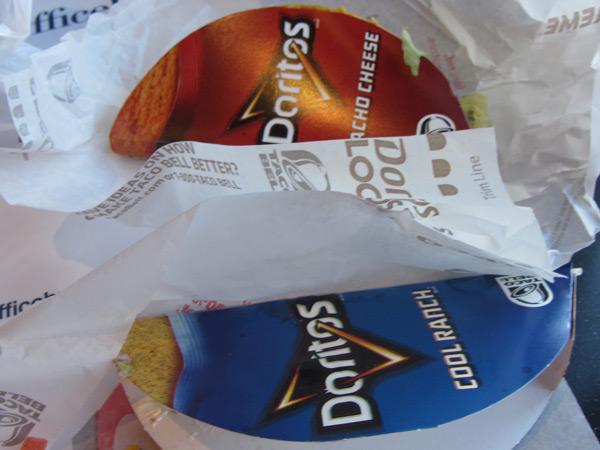 The big surprise came when I put down one of the tacos midway through eating, placing it with the previous top side facing down. Did it magically transform into a Nacho Cheese taco? No, it did not. But apparently they use precisely the same stock of cardboard taco protectors for both flavors, with the appropriate flavor's side facing the opening in that paper wrapper.