Chinese version helps keep your hand out of the can

I recently obtained some Oishi Toss crisps, a knockoff of Pringles that my friend Maria found in China. This product generally followed the same formula as Pringles: Same can materials, same crisp materials, same shape of crisps. But they surprised me with an innovation that solves one of the fundamental problems of Pringles.

What's the problem? Getting the crisps out of the can. For the first few crisps at the top, it's fairly simple to slip your fingers in, but after that, you're on your own. You can try to spill some crisps out, which rarely works well, or try awkwardly reaching into the can, with potentially dire consequences. (According to statistics that I just made up, dozens of snackers get their hands stuck inside Pringles cans every month.) 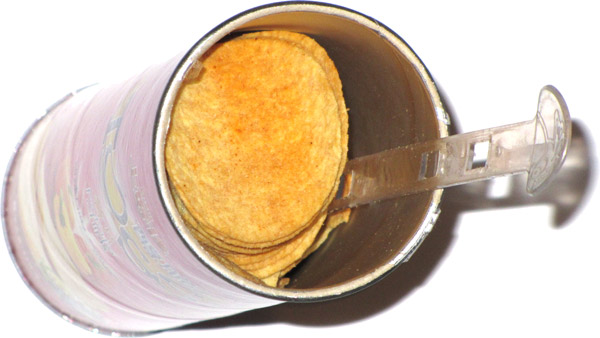 This can contained a piece of clear plastic on the inside, spanning the height of the can. At first, I couldn't figure out at first what it was for, but it turned out to be an innovative way to lift the whole stack of crisps. Conditions weren't ideal, as this can went through a rough transcontinental transport, so many of the crisps were broken. But even so, it did the job perfectly. Pulling the tab straight up lifted the entire pile so that regardless of how many crisps were left inside, the top crisps were easily within reach. After grabbing some crisps, you can let gravity pull the pile back down until you're ready for the next handful.